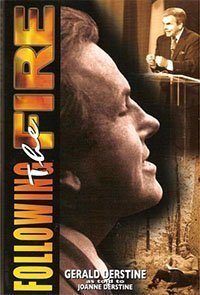 In 1955, Gerald Derstine, a young Mennonite pastor in northern Minnesota, prayed for revival and God answered with seven days and nights of supernatural happenings, now chronicled in his testimonial book, Following The Fire. Directed by the Spirit of God to move to Florida, the Derstine family met and teamed up with Henry M. Brunk, a retired businessman who had formed Gospel Crusade, Inc., a non-profit corporation, to do missions work. Their vision was the same: to fulfill the Great Commission…go into all the world and preach the Gospel, winning souls to Christ and bringing healing to those who are hurting. For many years, they worked together, establishing churches, schools and orphanages at home and abroad. Gerald, his wife, Beulah, and four children traveled in evangelistic ministry throughout the world. In 1965, Derstine founded Strawberry Lake Christian Retreat in Minnesota where the revival had taken place. After 52 years of ministry, that Retreat closed in 2017 and now serves as a rehabilitation center on the White Earth Indian Reservation. In 1968, Gerald established Christian Retreat on 110 acres in Bradenton, FL, envisioning a Christian community where year-round conferences could be held.

Following in his father’s footsteps, Phil Derstine, a graduate of Oral Roberts University, accepted the mantle of leadership, establishing The Family Church at Christian Retreat in 1986 and becoming president of Gospel Crusade, Inc., in 1990. He and his wife, Jannette, married 40 years, co-pastor The Family Church at Christian Retreat and its outreaches. Brother Gerald went to his heavenly reward on Feb. 12, 2022, at the age of 93.

Over the past six decades, thanks to many who have partnered with us, we have seen multitudes of lives transformed through the global outreaches and apostolic network of Christian Retreat/Gospel Crusade. Leaders have been trained and another generation has stepped forth to carry the torch and proclaim the Gospel message. Our mission remains the same: to teach Kingdom of God principles and help Christians learn how to share Christ’s love, joy and peace through the power of the Holy Spirit. We will work until He comes….